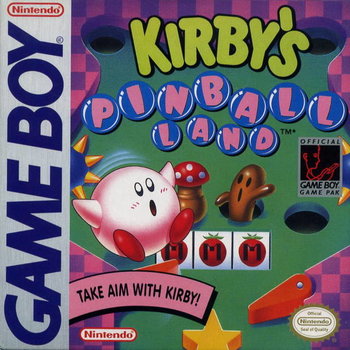 Kirby's Pinball Land (original title: カービィのピンボール, Kābī no Pinbōru, or "Kirby's Pinball") is a Kirby pinball video game for the Nintendo Game Boy. It was developed by HAL Laboratory and originally released in 1993.

In this game, Kirby is out to stop Whispy Woods, Kracko, Poppy Bros. Sr., and King Dedede, who have taken up residence in three Pinball Land playfields. Turning himself into a pinball, Kirby plays through each boss's table, bouncing off walls, bumpers and enemies for points and bonuses. Each playfield is made of several screen-sized floors, with various gimmicks to help Kirby reach the next floor, such as Warp Stars or characters to bounce on. Getting a Warp Star on the top floor allows Kirby to confront that table's boss; after defeating all three bosses, he will then fight against King Dedede.

In spite of its difficulty, Kirby's Pinball Land was well received by many players, and became one of IGN's nominees for "Game Boy Action Game of the Century". The game engine would later be used in Pokémon Pinball.