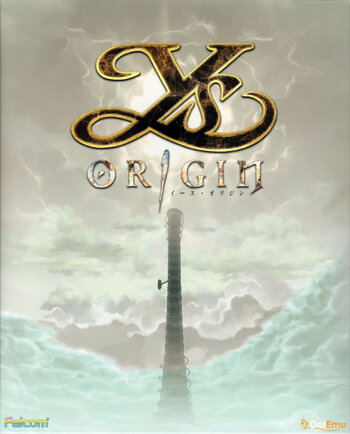 Ys Origin is an Action RPG Prequel of the Ys franchise, developed and published by Falcom and was released on Microsoft Windows in Japan on December 21, 2006, while XSEED Games published the localization and released it on May 31, 2012 for Steam. Origin was also ported to the PlayStation 4 on February 12, 2017, the PlayStation Vita on May 30, 2017, the Xbox One on April 11, 2018 and the Nintendo Switch on October 1, 2020.

Taking place seven hundred years before the events of Ys: Ancient Ys Vanished ~ Omen, the ancient "Kingdom of Ys" on the island of Esteria is led by the twin goddesses Reah and Feena. Through the "Black Pearl", a powerful artifact that gave rise to the kingdom, its citizens can use magic and perform miracles. When demons suddenly encroach upon the land, bringing swift devastation, the goddesses use the Black Pearl to raise Ys into the sky in order to stave off the demonic threat. Unfortunately, the beasts began constructing the giant "Darm Tower" where they continue launching their assault.

As war continues between the survivors of Ys and the demons, the goddesses seemingly disappear, taking with them the Black Pearl back to the surface. The "Six Priests of Ys", the goddesses' servants, task a search party of knights and sorcerers to secure Reah and Feena's safety and bring them back. However, the only place the goddesses could have went to is none other than the Darm Tower.

Ys Origin retains the 3D game-play used in Ys VI: The Ark of Napishtim and Ys: The Oath in Felghana. As a chronological Prequel, it is the first game to not feature Adol Christin as the game's protagonist (outside of bonus game modes like Time Attack and Arena Mode). Instead, three characters and their respective stories serve as the overarching narrative of Ys Origin:

Ys Origin has the following tropes: