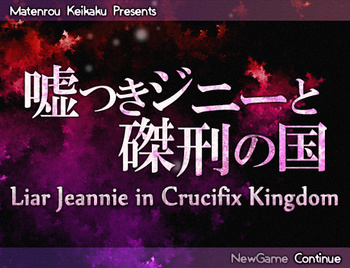 Liar Jeannie in Crucifix Kingdom is an RPG Maker game developed by Uta (aka Sky Scraper Project, who had earlier created Standstill Girl) in 2015 and translated by vgperson in 2016. The titular Jeannie is a girl imprisoned in the Crucifix Kingdom of Morte Moses, where she'll either be enslaved or sacrificed by the undead. Fortunately, she escapes her cell and teams up with her brother, Marta, to escape this city, provided they find a way to overcome the kingdom's tight security and the evil Cadaver Queen.
Advertisement:

The front-view combat system is designed so that the playable characters rely solely on equipping items (any item) for stats and skills rather than grinding for levels. You can also collect every undead mook you defeat and add them to your own stock of summonable mooks, which compensates a bit for the small party. Many of the skills share their name with skills from Standstill Girl, which was also made by Uta. The game also features a dungeon crawling movement system, where enemy symbol encounters can only move when the party moves, requiring careful movement on the player's part if they want to minimize encounters.