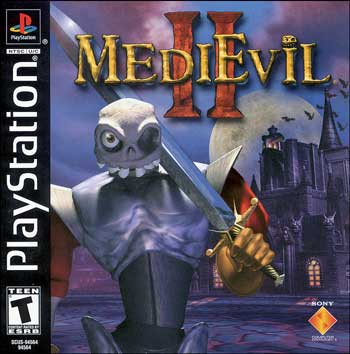 MediEvil 2 is an Action-Adventure sequel to MediEvil for the PlayStation, released in 2000.

Over five hundred years has passed since the undead knight Sir Daniel Fortesque defeated Zarok the Sorcerer and rescued Gallowmere. In Victorian London, one Lord Palethorn unleashes the powers of darkness from Zarok's spellbook, raising the dead and demons once again. Sir Dan too is awakened, and teams up with occult expert Prof. Hamilton Kift to stop Lord Palethorn's plan for world domination.