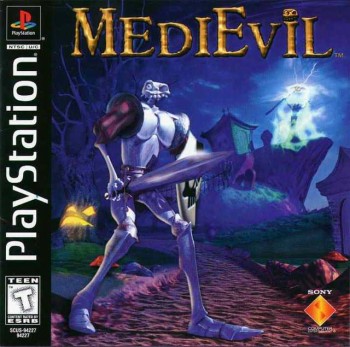 100 years I've spent in exile, using my anger to keep me warm, feeding off my suffering, relaxing with my angst. But soon they will pay, all of them - including Fortesque. He thwarts my first plan to conquer Gallowmere and then posthumously claims to have killed me! When I find him I'm going to get medieval on his bony behind. I never liked him anyway, always hanging around the court, interfering: "Where are you going with that dead cat, Zarok?" "Where did you find that brain, Zarok?" Wretched busybody.
Advertisement:

A 3D Action-Adventure platformer for the original PlayStation, developed by SCE Cambridge. It has been pegged as the much lighter and funnier spiritual grandfather of Dark Souls.

Long, long ago in a bygone age, Sir Daniel Fortesque was a lowly knight who regaled the nobles of Gallowmere with his wild tales of slain dragons and vanquished legions, which so impressed the king that Daniel was appointed head of the royal battalion. No more than an honorary position, as Gallowmere had not seen war in centuries, but the king liked stories, and Sir Dan was an excellent storyteller.

But then the evil Zarok, former court magician, returned from his years in exile and unleashed an army of demons and undead to take the kingdom for his own. Sir Dan was then thrust at the front of the king's army to face the unholy horde. Songs are still sung about how Daniel charged and carved a swathe through the accursed multitude, killed Zarok's own champion Kardok and then brought low the sorcerer in personal combat before finally succumbing to his many wounds, saving Gallowmere at the cost of his life.

What a load of tosh.

In reality, an arrow fired by one of Zarok's skeletal minions in the opening moments of the battle caught Fortesque right in the left eye. Dan was dead before he hit the dirt, and his second, a mere boy, had to lead Gallowmere's army and carry the day in his stead. The demonic horde were beaten back at great cost, but Zarok's remains were nowhere to be found. Embarrassed that he had fallen for a charlatan who talked a big game and then fell in the first charge, and fearful for the security of his kingdom, the king saw fit to weave a grand falsehood surrounding Dan's "heroic" death, hastily buried him in a tomb fit for a hero, and then forgot about him and tried his best to ensure everyone else did the same.

Zarok and Dan's names and exploits faded into the fog of time. One hundred years passed, and then Zarok returned. He cast a dark spell on the kingdom of Gallowmere, enslaving the living and raising the dead. Including Daniel. Fate, it seemed, had given the arrow-fodder a second chance. A chance to forget the ignoble truth, to defeat Zarok and save Gallowmere for real and live up to the legend, and maybe - just maybe - earn a place in the hallowed Hall of Heroes, where the greatest warriors of history spend eternity feasting, singing and arm-wrestling.

Try not to screw it up, eh?

A sequel, MediEvil 2, was released two years later, advancing to the Victorian era, set in and around London, where a new villain, Lord Palethorne, has gotten his hands on the Zarok spellbook, and plans to use it to take over the world as Zarok tried to.

A remake of the original game entitled MediEvil: Resurrection was an early release for the PSP. It makes a few alterations to the original plot, introduces a number of new characters and greatly plays up the humor. The gameplay is also heavily altered, and many levels are missing, resulting in a much shorter experience.

It was announced at PSX 2017 that Sir Daniel would be coming back from the dead once more, with a remake of the original MediEvil for the PS4, similar to the Crash Bandicoot N. Sane Trilogy earlier that year. The project was later revealed to be developed by Other Ocean Interactive, with more information and a teaser trailer.

This PS4 remake was released on October 24th 2019, just in time for Halloween. Unlike the more compressed PSP remake, this one is a very faithful recreation of the original, with a few features added, like a list of enemies, environments, etc., voice narration for the books, and a second weapon slot so you can change weapons on the fly. A comic book prequel/sequel was also released to tie in with the remake.