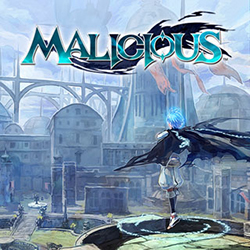 Malicious is a download-only 3D action game developed and published by Alvion (in Japan Only, in other countries it was published by Sony) for the PlayStation 3 and the PlayStation Vita. The main goal of the game is to defeat a dangerous group of creatures known as the Malicious.

The game’s objective is pretty simple, you choose a player character – either male (Valeria) or female (Erica), there’s no difference – then you’re transported directly to a boss fight. Yes, you read that right; there’s no level progression in Malicious. You jump headfirst into a series of epic Boss Battles. Your main weapon is a shapeshifting cloth called the Mantle of Cinders; this unique weapon can take many forms and stances for attack and defense. In the beginning, its forms are limited to close-ranged strikes and long-ranged projectiles, but as you defeat the Bosses, more abilities are added to the mantle.

Outside the game, there’s a feature reserved for its storyline — minimalism within the gameplay, depth in the side material. The main campaign itself is almost devoid of any sort of storytelling; you are given little reason to partake on these Boss Battles other than a short explanation which basically boils down into “kill them because they’re evil". For those seeking for a story, there’s a session in the Title Screen called Background Story; this menu is a short digital novel narrating in great detail the events leading to the battles you find in the main campaign.

The game was released in October 2010 in Japan, February 2012 in Europe and Australia, and July 2012 in the United States, and is available to download from PlayStation Store. Because of the game's critical success, an enhanced port of the game was announced for the PlayStation Vita, called Malicious Rebirth which added six more bosses and some more sub-powers. On February 21, 2017, the game was re-released on the Playstation 4 and was renamed Malicious Fallen, which added content from both Malicious and Malicious Rebirth as well as new exclusive content for the system.