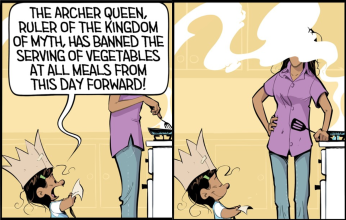 "And as years passed and there were fewer in the city (and none beyond it) who remembered my face, the wildest stories got about as to what that veil hid."
— Orual, Till We Have Faces
Advertisement:

A variant of He Who Must Not Be Seen: The audience never gets a good look at this character's face. Specific variants include characters which are (almost) always...

There are several reasons for writing a faceless character, depending on their role in the plot. For a recurring character, hiding their face lends an air of ambiguity to the character and their motives. If said character is a villain, this additionally serves to make them seem more threatening. Often the villainous Faceless are a Diabolical Mastermind, The Man Behind the Man, or even an Unseen Evil.

Non-recurring faceless characters tend to be Cannon Fodder Faceless Goons, whose facelessness removes their individuality, their humanity, and the audience's squeamishness about their deaths. Real-world famous people/roles may not be shown, to prevent the work from becoming dated.

Occasionally, a faceless character will be dramatically revealed. This generally happens at the end of the story, or at least the character's tenure in it. The Reveal may try to surprise the audience by showing a Nerd in Evil's Helmet, The Mole, or even no face at all. Perhaps we will see a Nightmare Face—common for villains—or perhaps they were Beautiful All Along, or maybe They Look Just Like Everyone Else!

The Faceless exist to increase drama or impress people. Contrast this with the Faceless Masses, which is done for the artist's convenience, while the Scenery Censor hides other body parts, to please Moral Guardians.

The BigBad of Season 1 of Big Hero 6: The Series

The BigBad of Season 1 of Big Hero 6: The Series