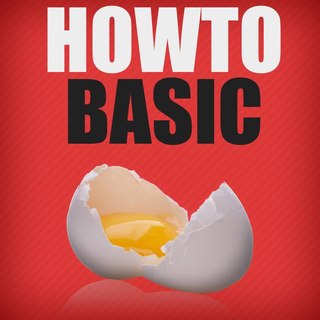 "How To Describe HowToBasic Here"

is a bizarre YouTube channel, promising to teach the basics of everyday life. However, its lessons inexplicably involve unorthodox (and often violent) methods of performing these tasks, and smashing eggs for no apparent reason. Think of it like a way crazier and way more destructive version of You Suck at Cooking that tries to cover a wider range of topics but the host of the show can only speak in animalistic grumbles and is probably possessed by demons.

The man who runs the channel, only known as "Mr. Basic" (nothing else is known about him due to his mastering of the He Who Must Not Be Seen trope), is part of a four-man group called "The Shrimpson Boys" that engage in wild and often dangerous Witty Banter-filled antics on each others' channels. The other members of the group are Filthy Frank, Maxmoefoe, iDubbbzTV, and Dolan Dark