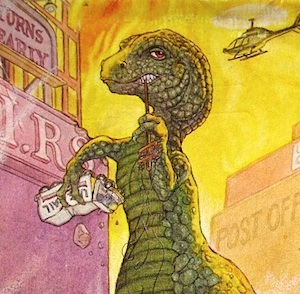 Ah, Godzilla. One of the most easily recognized monsters in fiction. A giant reptilian monster that rampages across Tokyo. Because of his recognizability, writers/directors/producers/etc. will often use a parody of him for spoofs of giant monster attacks.

Enter the Notzilla. The Notzilla is a Stock Parody of Godzilla used in movies, cartoons, TV shows, and other forms of media. While the Notzilla may bear a resemblence to the famous Japanese movie monster, he may also be just a generic reptilian monster with "-zilla" at the end of his name. The Notzilla may also parody other aspects of Japanese monster movies such as bad dubbing and cheesy special effects. A lot of them tend to be colored green, despite the original having scales that are black to charcoal gray.

Compare Rent-a-Zilla, which simply involves some sort of giant creature (not always a Godzilla parody) present in a work not normally focused on giant monsters. Also compare King Kong Copy, for expies and parodies of the other most iconic giant movie monster, and T-Rexpy, for creatures inspired by the real-life King of the Dinosaurs, Tyrannosaurus rex (which can overlap with this trope). See also King Koopa Copy, for characters inspired by another famous, fictional, monstrous reptile.

Not to be confused with CoDzilla, a fanspeak term for overpowered "Cleric Or Druid" builds in Dungeons & Dragons.