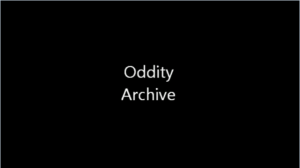 ♪ Dun dunnnn, dun dunnnnn...... ♪
"And welcome to the Oddity Archive, the show that reawakens nostalgia for things you didn't even know you had."
— Ben "That Shmuck with the Cardboard Box" Minnotte
Advertisement:

In April 2012, Colorado resident and former folk musician Ben Minnotte became the victim of a car crash that left him with neither a job nor wheels, and with a damaged ribcage. Trying to find ways to cope so he could think less about his pain, he decided to look back on his childhood curiosity with technology and make an article about the Max Headroom incident in June 2012. However, he discovered that his humor barely made any sense written, so he decided to make a one-off podcast. But then that was scrapped as well since there's a whole video component to the whole thing. So what did he do? He decided to try his hands out at being an internet Caustic Critic towards this stuff. And, thus, the Oddity Archive was born.

Oddity Archive is a webseries

regarding past technology and the odder, often scarier but relatively obscure parts of film, television and music, occasionally making riffs on certain things.

"Aaaand welcome to the Tropes Related to the Series Archive."

That's it for today's Archive. Join us next time when we ponder why TV Tropes seems almost intentionally designed to ruin your life.