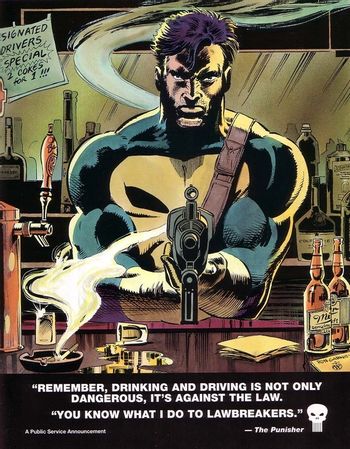 "I think this skeleton-pumped PSA perfectly reflects that era's methods of keeping children away from bad things: Exaggerate until they shit themselves straight."
— X-Entertainment
Advertisement:

If you've spent any time in a Western (and probably American) public school system, then you've no doubt seen one of the films, cartoons and filmstrips whose purpose is to inform bright-eyed schoolchildren about themselves and the world around them. Judging by the way many of these films turn out, however, one might suspect that there's a special wing in Hell set aside just to produce them.

The origin of this trope lies in the belief that children aren't very receptive to positive reinforcement, and therefore must be informed in the least subtle way possible about all of the negative consequences which may befall them if they do anything evil, stupid, or both. For instance, tell little Johnny that he has a better chance of living a long healthy life if he avoids drugs. There's a pretty good chance that he'll say "Sure" and then promptly forget every single word you just said. But, tell Johnny that he'll wind up drooling in a back alley covered with sores while jamming a dirty 8-inch long needle into his arm and smell like week-old sardine salad for the rest of his short miserable life if he takes a single puff from a joint given to him by The Aggressive Drug Dealer, and he'll listen. He may laugh his disbelieving butt off, but he will listen.

This mentality has formed the basis of all sorts of cautionary tales, many of which employ extreme and terrifying imagery in their attempt to keep children on the straight and narrow path. Yes, yes, irreversible psychological damage might occur, but it is all for their own good, so it's okay. So what if a kid winds up a twitching vegetable afraid of venturing into the outside world? At least he won't get kidnapped by a lollipop-wielding child-molester or hit by a bus while jaywalking and smoking crack.

The theory is that when they grow older and "able to understand," adults will be able to give the "real" reasons for such mores. A common reality is that there's less to stop them from engaging in that behavior once they realize that their face won't "freeze that way." Worse, the realization that they'd been fed a bunch of hooey may make them ignore genuine and honest warnings.

Examples of some of the mind-meltingly scary imagery include: a boy getting run over by a train, vandals poisoning a deer, people in Africa contracting hideous diseases like sleeping sickness and elephantiasis, a choking victim who turns bright blue and nearly dies… Let's not even get into the bloody, windshield-cracking horrors inflicted in Driver's Ed class or what happens when people panic if the school catches on fire.

Of course, not every child who sees these types of films will become traumatized by them. For every kid who pukes at the five-minute mark of Wheels of Tragedy, there will be at least one who will cheer loudly at the sight of karmically-induced gore splashing across the screen or find the whole thing Narmtastic. (A phenomenon excellently spoofed in this Onion article

Note: Sometimes Scare 'Em Straight campaigns will actually backfire, and the ads that were designed to admonish a certain behavior will actually encourage it and make it look cool. There are those who believe that certain companies might be doing this sort of thing on purpose to lure in new customers.

After all, why else would cigarette and alcohol companies be so quick and eager to create ad campaigns that are supposedly against middle-schoolers using their products, when most new users tend to get hooked at that age? It's a debate that will probably rage on for as long as alcohol and tobacco remain available.

Scare 'Em Straight as a whole not only covers instructional shorts, but scary public service announcements as well. God forbid you should settle in to enjoy your Saturday Morning cartoons and your Froot-Loops without being reminded of the Lovecraftian Body Horror which can overtake you if you fail to brush your teeth. Some politicians will use these tactics to try and scare people off voting for their opponent, which is known as a Scare Campaign.

This is the modern equivalent of the (hopefully) Forgotten Trope of children's literature intended to scare kids into good behaviour by depicting a Family-Unfriendly Death and/or the torments of Fire and Brimstone Hell inflicted on "boys and girls like you". This was a common theme in older fairy tales like Little Red Riding Hood, but modern tellings have become Disneyfied over time by removing the especially nasty bits and adding happy endings. In the present day, fringe Christian sects keep this tradition alive with "hell houses" that usually operate around Halloween and serve as The Moral Substitute for your garden-variety secular haunted house. These are disavowed by the mainstream; however, a hell house graced the cover of Newsweek as recently as 2006.note ("Visions of Hell", by Matthew Philips and Lisa Miller, Newsweek, November 6, 2006, 52; also "Signaling Through the Flames: Hell House Performance and Structures of Religious Feeling" by Ann Pellegrini [1]

It could be said that the large number of examples on this page are a testimony to there being too much PSA time available to a vast number of specialised interest groups, each one convinced that their anvil needs to be dropped, and unaware that people become desensitized at a young age by the sheer volume of Scare 'Em Straight messages.

This is, arguably, also one of the intentions of older forms of punishment, especially where the criminal (or his/her tortured-to-death corpse) is displayed in public as a warning to others.note See also: The "Real Life" examples in the Cruel and Unusual Death article. Just make sure you don't plan to sleep that night.

Can lead to Do Not Do This Cool Thing, if the audience likes looking at gruesome pictures. May be used in a Sex Miseducation Class. Oh, and it doesn't necessarily entail scaring gay people into being straight (though that certainly has happened, though not as commonly anymore). Compare Harm Reduction, which is the usual end goal of these programs. If someone tries to scare someone else straight in-universe, they'll often tell a Scarily Specific Story.

Having heard of the idea of talking to plants in The '70s, Crowley administers this by threatening his plants to "grow better", making an example of a small plant with a spot in its leaves. While the plants are the healthiest in London, they are also the most terrified.

Having heard of the idea of talking to plants in The '70s, Crowley administers this by threatening his plants to "grow better", making an example of a small plant with a spot in its leaves. While the plants are the healthiest in London, they are also the most terrified.