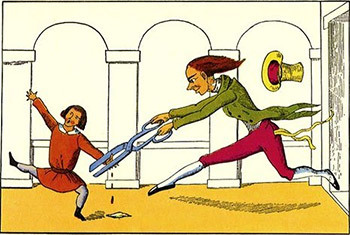 There once was a boy who liked to suck his thumbs. His mother asked him to stop, but he wouldn't. So she cut off his thumbs. Now he has no thumbs. Good night.
Advertisement:

Der Struwwelpeter (Shaggy-Peter or Shockheaded Peter), written and illustrated by Heinrich Hoffmann, is an 1845 German children's book filled with cautionary tales. These cautionary tales are more grim than others, however — they often end in death or dismemberment for the child. They are a source of plenty of Nightmare Fuel, too.

There are ten stories, each of them rhyming and illustrated. They are:

Struwwelpeter was adapted into the opera Shockheaded Peter (premiered in 1998), with music by The Tiger Lillies.

Can be read online here