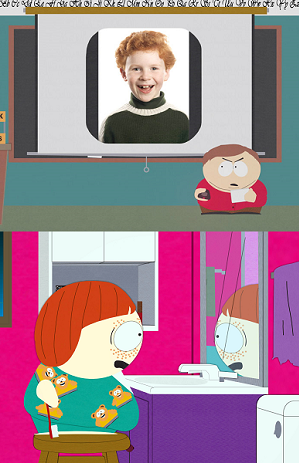 Racism is a terrible thing. And sometimes, someone will take it upon themselves to teach a racist just what a terrible thing it is. And, to do that, they use some kind of power to transform the racist (usually temporarily) into a member of the race they despise.

Not to be confused with Black Like Me. In Black Like Me, the subject undergoes the change voluntarily while in Color Me Black, the subject is changed involuntarily. Also, Color Me Black is much more likely to involve supernatural forces than Black Like Me, which usually involves more realistic methods of changing one's appearance. Also not to be confused with Blackface, when a person costumes themselves as a minority for purposes of racist mockery.

See also Karmic Transformation, You Are What You Hate, and Persecution Flip.

See And Then John Was a Zombie for the supernatural variant. Compare Gender Bender.