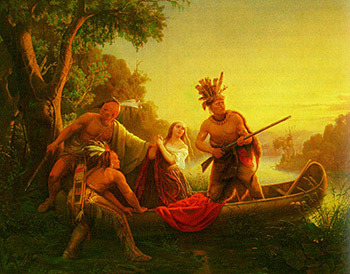 A Forgotten Trope in which a good, Puritan girl is captured by Indians and has to resist their culture, the Captivity Narrative was pretty popular in America from the 17th-19th centuries. These were often folktales that were made up long before the printing press and other forms of culture were readily available in remote settlements. These, oftentimes, exploited The Savage Indian archetype for the sake of Rule of Cool or Rule of Drama. Many of the early examples were based on true-life stories, fictionalized a bit to tell a more exciting story, but later they became more overtly fictional.

A variation of this trope—a white woman is kidnapped by Indians, but chooses to stay with them because they are Closer to Earth noble savages—has become common in modern romance novels.

The trope has its roots in a much older mediaeval one where virtuous European Christians were kidnapped by Muslim corsairs and offered to convert to Islam over the course of their captivity. Unlike the later American version, this would virtually never end with the protagonist joining the natives. Per the dogmatic religious mores of Europe at the time, the aesop of those stories was the nobility of persevering through suffering to hold to your beliefs.

Contrast Going Native, in which assimilation to the native culture is framed as a good thing rather than a bad one. See also Damsel in Distress and the more hazardous version of this trope, Captured by Cannibals.