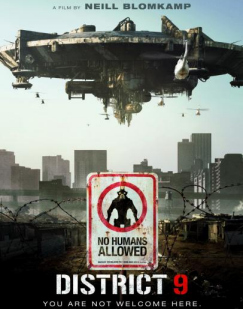 "There's a lot of secrets in District 9."
Advertisement:

District 9 is a 2009 science-fiction Thriller/Mockumentary by Neill Blomkamp, based on his short film Alive in Joburg (which can be found on YouTube) and produced by Peter Jackson.

In 1982, a massive flying saucer came to a halt above the city of Johannesburg, South Africa. After three months of complete silence, the government had the ship boarded. Surprisingly, most of the aliens turned out to be confused, timid and starved. They were "drones" — working caste aliens, incapable of surviving or piloting their starship on their own, and their leaders had mysteriously disappeared.

In August 2010, after many failed attempts to integrate the aliens into South African society, they found themselves confined to "District 9", a fenced-off shanty-town operated by multinational defense contractor MNU. The first third of the film is filmed documentary-style, focusing on sniveling corporate git Wikus van de Merwe (Sharlto Copley). Wikus is a MNU agent who's given the task of evicting the aliens, derogatorily nicknamed "prawns", from District 9. His job is to get the legal paperwork out of the way, so that the aliens can be transported to a new concentration camp in the wilderness, where they can't bother humans.

During a search for weapons in a shack belonging to the alien "Christopher Johnson", Wikus accidentally opens up an alien device, spraying black goo all over himself. As the day drags on, he's forced to get a lot closer to the "prawns" than he'd have liked. When Wikus gets forcibly drawn into the life of the aliens and pursued by MNU, the documentary aspect slowly starts taking a backseat to Wikus' personal horrors and Christopher's efforts to save his people.

The film itself is an odd (but very fitting) combination of a sociopolitical Improv Mockumentary, extreme violence based on (among other things) Robocop and Halo, and a classic science-fiction horror story (slash Black Comedy) very much like The Fly (1986). Depending on how you watch it, it's either a scathing political satire with cool action elements, or a kickass action film with an underlying social moral.

In 2019, Weta Workshop held a Kickstarter campaign to fund District 9: The Boardgame.