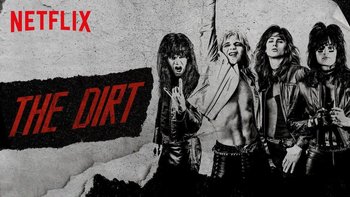 Motley Crue at its wildest.
Advertisement:

The Dirt: The Unbelievable Story of the World's Most Notorious Rock Band - Mötley Crüe, or simply The Dirt, is a 2019 biographical comedy-drama about glam rock and Hair Metal legends Mötley Crüe. Based on the 2001 autobiographical book of the same name, the film takes a look at the band's formation in the early 1980s, then moves on to their glory days in the mid-'80s, as well as the low points each of the band's members experienced along the way. It also covers the band's struggles to stay relevant in the Grunge and alternative-dominated 1990s music scene.