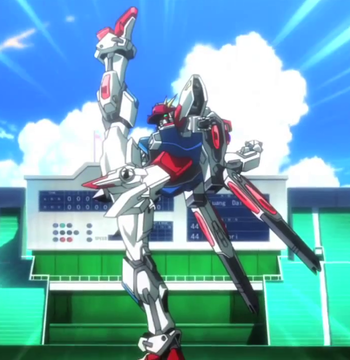 Humongous Mecha are a curious thing. By all logic, they can't work in the real world due to issues with weight distribution and speed. Even if such a machine existed, it would probably move something like Honda's Asimo — slow, clunky, and stuttering.

Apparently, nobody told this to Japan — watch any given mecha anime, and you'll see hundred-meter battle machines moving with the lithe, fluid grace of martial artists. Even more confusing: the pilot can pull off these amazing feats with nothing more than a pair of joysticks and a set of pedals. Why is this? Probably because, if the robots moved like the multi-ton walking tanks that they are, then the series would bore its viewers to death. A carryover from the Super Robot days considered too catchy to dismiss along with the humanoid form — thus making this a rather obvious sub-trope of Rule of Cool. A notable exception is when a smaller character is in the scene, in which case from their perspective the machine will be shown as moving very slowly.

Kaiju tend to have the same problems, for similar reasons; you'd be bored if Godzilla threw an enemy and it took half a second between the start of its trajectory and it hitting the ground.

It should be noted that this phenomenon occurs almost exclusively in Japanese media;note as far as actual Mecha are concerned; giant monsters of all stripes are often equally implausibly nimble, Humongous Mecha from Western sources tend to actually be big, slow, clumsy walking tanks (see BattleTech). This happens occasionally with Japan as well (see: Armored Core before the fourth installment, and of course, Steel Battalion).

It also should be noted that spider tanks can fall just as easily in this trope as humanoid robots, but rarely do. In fact, if a Mecha series has both you can expect that humanoid robots will move with much more fluidity than the multi-legged counterparts, even though logically the opposite should be true. Animal Mecha almost always display this, and if they take the form of an animal more agile than humans (such as feline/canine), expect them to be equally more agile or graceful than humanoid counterparts.

Can allow the use of a Motion Capture Mecha.

This is also a common trait of the Giant Woman.

Often a form of Art Major Physics. May be contrasted / paired with Graceful in Their Element, when the pilots are unable to do anything remotely as acrobatic themselves.

Subtrope of Faster Than They Look.