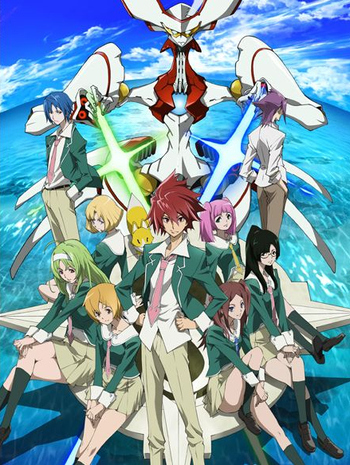 Star Driver: Kagayaki no Takuto (translated as Radiant Takuto or Takuto of the Radiance) is a Humongous Mecha anime series created and animated by BONES and produced by Aniplex, which ran as part of the Fall 2010 lineup and has been licensed for the USA by Bandai Entertainment. Episodes are being added to Hulu and can be found here.

US viewers can also watch this show at Crunchyroll.

On Southern Cross Island, Wako Agemaki and her fiance Sugata Shindo find a boy passed out on the beach. This boy is Takuto Tsunashi, a transfer student at Southern Cross High, who was so excited to begin his new life that when he missed his ferry, he swam across the sea himself.

So begins Star Driver, a show about high school and the joy of youth.

Beneath the school, a sinister organization called the Glittering Crux Brigade is trying to awaken the giant robot Cybodies. To this end, they are kidnapping the four Maidens of the island to undo the four seals on Zero Time, a hidden dimension that captures active Cybodies so they can't exist in the real world. They've broken one, and Wako is next up. Takuto is too late to save her, and the Glittering Crux escapes into Zero Time... but then Takuto follows them, calling his own Cybody Tauburn and transforming into the Galactic Pretty Boy.

So begins Star Driver, a show about mecha and lots and lots of camp.

This page has a character sheet, as well as Moment of Awesome, Funny, Heartwarming, and Tear Jerker pages.

A Compilation Movie, with about three minutes of new footage, called Star Driver: The Movie was released on February 9th 2013.