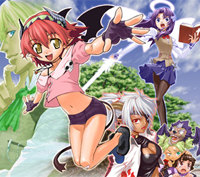 For years, Pam Akumachi has listened to her grandmother's stories about meeting a very kind devil earlier in life. Deciding that she wants to have a similar experience, Pam tries to summon a devil after school. The experiment goes wrong, and Pam is pulled into a world of spirits.
Advertisement:

Soon after arriving in this world, she meets Linfa, an angel who looks exactly like Pam's human friend Rinka, but with a very different personality. Linfa attacks Pam but Pam is saved by a man named Remy, who tells her that the world she is in is inhabited only by spirits, angels, and devils, with humans only existing in fairy tales. This goes for Pam as well, as she has been turned into a devil trainee, a low level devil, and is told that, in order to return to her world, she must become a full-fledged devil.

Stray Little Devil is a five volume long fantasy Manga by Kotaro Mori, which was originally serialized in the shonen magazine Dengeki Comic Gao! from 2004 to 2007. It has been translated and published into English by Dr Master Productions.