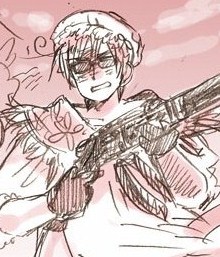 "Try to steal my purse and I'll blow your fucking brains out, bitch."
Advertisement:

The 2011 Halloween event for Hetalia: Axis Powers. It's Halloween in the Hetaliaverse, and America is having a costume party! Japan is worried about the food coloring (as usual) but America assures him that they stopped using actual blood and gore since Lithuania had such a hard time cleaning up last year. We then see all the nations arriving in their respective costumes.

Scanlations of the event can be found here.

Tropes below relate to both the comics and the fan responses.