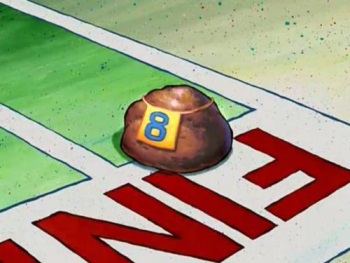 Cue the sounds of jaws dropping to the floor.
"A dark horse which had never been thought of, and which the careless St. James had never even observed in the list, rushed past the grandstand in sweeping triumph."
— Benjamin Disraeli, The Young Duke
Advertisement:

A Dark Horse Victory involves a third competitor winning in a competition with two major rivals. In many cases:

A common manifestation of this trope involves the protagonist of the story as the judge in a contest, forced to choose between two people, each of whom is extremely important to him (say, a love interest and a best friend or relative). He will often attempt to dodge the difficult decision by Taking a Third Option and ignoring both choices in favor of someone totally different (who may or may not actually deserve the honor).

Often, though not always, the third competitor who wins the award is a throwaway character completely out of the blue — who the audience may not have even known was in the competition until the end or, in fact, may have never seen before (or since) — or even an Inanimate Competitor. And even if they were seen, their performance may have been obviously inferior to either of the rivals, even after you factor in their rivalry. As a Dark Horse Victory requires a third competitor, an upset in a strictly two-potential-winner competition would fall under Assumed Win.

Obviously, this is Truth in Television. Sub-Trope to Non-Protagonist Resolver. Compare Slow and Steady Wins the Race.

Examples of the "Hey, at least the other guy didn't win" variation

The 24/7 Championship is one of the most interesting Championships of the WWE. The only rules are that anyone can win it by pinning the current champion... even a WWE corporate employee that has never stepped in a ring.

The 24/7 Championship is one of the most interesting Championships of the WWE. The only rules are that anyone can win it by pinning the current champion... even a WWE corporate employee that has never stepped in a ring.