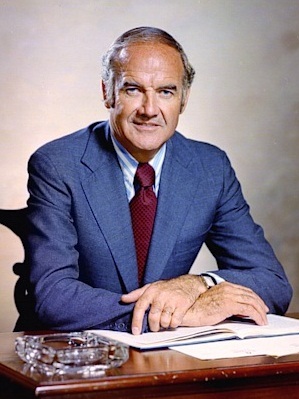 George Stanley McGovern (July 19, 1922 – October 21, 2012) was an American politician and historian who was the Democratic Party presidential nominee in the 1972 presidential election.

Born and raised in South Dakota, McGovern volunteered for the U.S. Army Air Forces upon the country's entry into World War II and as a B-24 Liberator pilot flew 35 missions over German-occupied Europe from a base in Italy. Among the medals bestowed upon him was a Distinguished Flying Cross for making a hazardous emergency landing of his badly damaged plane and saving his crew. After the war, he became a history professor. He was elected to the U.S. House of Representatives in 1956 and re-elected in 1958. After a failed bid for the U.S. Senate in 1960, he was a successful candidate in 1962.

As a senator, McGovern was an example of modern American liberalism, and became most known for his outspoken opposition to the growing U.S. involvement in The Vietnam War, with the McGovern–Hatfield Amendment

seeking to end the war by legislative means, but was defeated in 1970 and 1971. He staged a brief nomination run in the 1968 presidential election as a stand-in for Robert F. Kennedy after he was assassinated. He subsequently co-led with later representative Donald M. Fraser the McGovern–Fraser Commission

, created by the Democratic National Committee in response to the tumultuous 1968 Democratic National Convention, which fundamentally altered the presidential nominating process by greatly increasing the number of caucuses and primaries and reducing the influence of party insiders. McGovern would subsequently run for the Democratic presidential nomination again in 1972; his long-shot, grassroots-based campaign found triumph in gaining the nomination but left the party badly split ideologically, and issues regarding his vice-presidential pick Thomas Eagleton undermined McGovern's credibility.note McGovern initially selected — with virtually no vetting — Eagleton, a Missouri senator, admittedly after being turned down by his first choice, Ted Kennedy. Just over two weeks after the convention, however, it was revealed that Eagleton had been hospitalized and received electroshock therapy for "nervous exhaustion" and "depression" several times during the early to mid-1960s. (Years later, Eagleton's diagnosis was refined to bipolar disorder.) McGovern initially supported Eagleton, in part because he saw parallels with his daughter's battles with mental illness, famously stating publicly that he was "1,000 percent" for Eagleton and had no intention of dropping him from the ticket, but an increasing number of influential politicians and newspapers questioned his ability to handle the office of vice president, and potentially president, and the resulting negative attention — combined with McGovern's consultation with preeminent psychiatrists and the doctors who had treated Eagleton — prompted McGovern to accept Eagleton's offer to withdraw from the ticket, the only time a major party vice presidential nominee has been forced off the ticket; he was replaced by United States Ambassador to France and brother-in-law of John F. Kennedy Sargent Shriver. Ironically, after Eagleton's death in 2007, he was revealed as being the previously-unnamed author of the quote that said that McGovern was the candidate for "amnesty, abortion, and acid" (although that was a Beam Me Up, Scotty!; the original quote was "amnesty, abortion, and legalization of pot"), a phrase heavily used by McGovern's political enemies during the election. In the general election, McGovern lost to incumbent Richard Nixon in one of the biggest landslides in U.S. electoral history, only winning Massachusetts and the District of Columbia. Though re-elected to the Senate in 1968 and 1974, McGovern was defeated in his bid for a fourth term in 1980. He mounted another presidential run in the 1984 Democratic primaries that even McGovern admitted was a long shot, and while he won a surprise third-place showing in the Iowa caucuses amidst a crowded field of candidates, he finished fifth in the New Hampshire primary, and dropped out of the race after finishing third in the Massachusetts primary.

Beginning with his experiences in war-torn Italy and continuing throughout his career, McGovern was involved in issues related to agriculture, food, nutrition, and hunger. As the first director of the Food for Peace program in 1961, McGovern oversaw the distribution of U.S. surpluses to the needy abroad and was instrumental in the creation of the United Nations World Food Programme. As sole chairman of the Senate Select Committee on Nutrition and Human Needs from 1968 to 1977, McGovern publicized the problem of hunger within the United States and issued the "McGovern Report", which led to a new set of nutritional guidelines for Americans. McGovern later served as U.S. Ambassador to the United Nations Agencies for Food and Agriculture from 1998 to 2001 and was appointed the first UN global ambassador on world hunger by the World Food Programme in 2001. The McGovern–Dole International Food for Education and Child Nutrition Program has provided school meals for millions of children in dozens of countries since 2000 and resulted in McGovern being named World Food Prize co‑laureate in 2008.