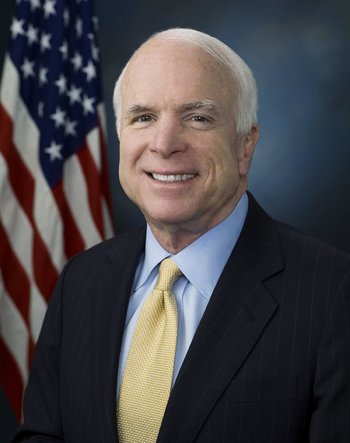 John Sidney McCain III (August 29, 1936 – August 25, 2018) was an American politician and US Navy officer who served as both a US Senator for Arizona from 1987 until his death in 2018. He previously served as a US representative for two terms.

McCain was the son and grandson of famous navy four star admirals. His grandfather, the original John Sidney McCain started out as a surface warfare officer, then earned aviator wings later in his career to qualify for command of an Aircraft Carrier, and ended WW 2 as Commander in chief of the US Pacific Command. He was the man who accepted the Japanese surrender onboard the USS Missouri. He died soon after. McCain’s father John Sidney Jr was a submariner during WW 2 and became Commander in chief of the US Pacific Command during The Vietnam War. He too passed away soon after that war ended. McCain attended the US Naval Academy at Annapolis like his father and grandfather, and like them, also graduated near the bottom of his class. His first son note  First boy that he fathered. He had adopted his first wife Carol’s two sons from a previous marriage John Sidney McCain IV followed his forefathers into the Naval Academy and became a US Navy helicopter pilot.

He served as a naval aviator in The Vietnam War, where he was shot down. He spent five and a half years at "Hanoi Hilton", the infamous Hellhole Prison for American POWs and was subjected to Cold-Blooded Torture to the point that he could never again raise his hands above his shoulders. He was offered early release due to his father’s status as CincPac but he refused, knowing full well that it would play into Communist propaganda about money and influence. After returning to the US upon the end of American involvement in Vietnam in 1973, McCain underwent lots of physical therapy to try to qualify to fly high performance jets again. He qualified enough to be given command of an A-7 Corsair flight training squadron and improved its safety record by a lot. But after he failed his next flight physical, McCain couldn’t get an at sea command billet, which put the brakes on his naval career. He was promoted to Captain and was assigned to the Senate as the Navy’s liaison officer. He was offered a final promotion to Rear Admiral lower half, but declined in order to enter politics.

A staunch conservative, McCain still stood out for his willingness to reach across the aisle on issues like health care, immigration, and America's own troublesome interrogation methods, leading him to be known as "Maverick". He started out as a boilerplate conservative in the House of Representatives from 82 to 86 and from 86 onwards in the Senate. McCain’s first Senate term was marred by his involvement in the Keating Five banking scandal, but escaped with only a censure. After winning re-election in 92, McCain rehabilitated his career by working with Wisconsin Democratic Senator Russ Feingold on campaign finance reform. His trademark legislation, the Bipartisan Campaign finance Reform Act or BRCA was declared unconstitutional by the Supreme Court in 2010.

McCain entered the race for the Republican nomination for president in 2000, but lost in a heated primary season contest to Governor of Texas (and eventual winner of the general election) George W. Bush. He ran for president against Barack Obama for president with Sarah Palin as his running mate but lost in 2008. He spent the last few years of his public service as one of the loudest Republican critics of Donald Trump, in part due to Trump disparaging his military service during his primary run. He died in 2018 after a battle with glioblastoma on the same day as his late friend, Senator Ted Kennedy, who died of the same disease in 2009.

McCain was married to Carol Shepp and Cindy Hensley and had seven children, including his daughter, Meghan, a commentator and co-host of The View. Long considered political royalty in Arizona, the state branch of the Republican party has censured the McCain family after they chose to endorse Joe Biden, John's longtime colleague and friend in the Senate, rather than Trump in the 2020 election, a move that many attribute to a string of Republican losses in the once solid-red state in recent years.

Books he had written