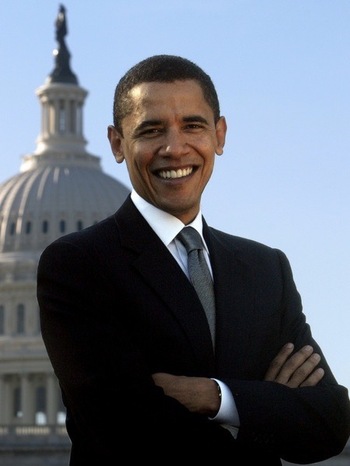 While he's certainly not David Palmer, he'll do just fine.
"Yes We Can."
Advertisement:

Barack Hussein Obama II (born August 4, 1961) served as the 44th President of the United States of America from 2009 to 2017, succeeding George W. Bush and preceding Donald Trump. Born in Honolulu to a white American mother and a Kenyan father, he spent his childhood in Indonesia and Hawaii before attending Harvard Law School and eventually settling in Chicago, where he worked as a community organizer and a college professor before being elected to the state Senate in 1996, and from there to the U.S. Senate in 2004.

He's relatively young (47 on taking office), being the only President born after 1946 to date, and is in a visibly loving relationship with his wife Michelle, and is often seen publicly with his daughters Malia and Sasha in non-political contexts. He is also the first American president to be of mixed-race ancestry (the son of a White mother and a Black father), an achievement that has been cited by some as proof that the Civil Rights Movement has paid off. At the same time, however, his mixed-race status led to a Conspiracy Theory that Obama was not actually an American citizen, and while Obama did release his birth certificate, the conspiracy still lingered with allegations that it was forged.note Though it should be noted that most legal scholars believe that it doesn’t matter where the person is born, only that he or she is an American citizen by birth and not a citizen by naturalization. Had he actually been born in Kenya, he would have been an American citizen by birth regardless because his mother was an American citizen. Neither John McCain nor Ted Cruz were born in the United States (the former in the then-American-occupied Panama Canal Zone, the latter in Calgary, Alberta, Canada) but both were able to run for President because they were children of American citizens, who just happened to be born in another country. In hindsight, the conspiracy theory was a sign of a greater "whitelash" against Obama's electoral win (the very idea of a Black POTUS having long been thrown around as grist for fear-mongering by white supremacists), and some analyst argued that the underestimation of this whitelash lead to the emergence of the alt-right during Obama's presidency and Trump's 2016 victory. At the same time, frustrations with persistent racial inequalities and violence towards minorities during Obama's presidency resulted in the Black Lives Matter Movement. Thus, the idea that America entered a "post-racial" age with Obama's presidency is generally considered a hollow sentiment at best, and most agree that the Civil Rights Movement still has many battles left to fight before it can truly be declared 100% successful.

Comedians, satirists and impressionists often struggled to find a consistent angle in portraying Obama, as his carefully guarded, straight-laced-and-straight-faced communication style pigeonheld any of the usual gaffes that could define a president in the popular mind (Obama certainly had a few such errors, but they were complicated, and didn't make for easy comedic fodder). The Onion largely focused on Obama's controversial drone warfare attacks and the disconnect between them and his more idealistic rhetoric. Key & Peele arguably struck the most resonant chord with their portrayal of Obama and his "anger translator" Luther, whose job it was to take the President's carefully worded language and express it in the angry terms Obama couldn't (which proved a brilliant opportunity in a White House Correspondent's Dinner when Obama himself took part, steadily getting angrier and angrier - and, one suspects, revealing some of his real feelings and frustrations beneath the calm outside). This was related to a broader sense (and criticism) of Obama as The Spock: profoundly rational and logical in thought processing, but unable or unwilling to channel the country's rage over, say, the economic devastation of the Great Recession, with most agreeing that a desire to avoid the Angry Black Man stereotype was the driving impetus behind it (the fact that Obama was actually a big fan of Spock made this unflattering comparison really easy for columnists). Obama contrasted his Spock-like rigidity though by simultaneously cultivating an image as something of a father figure for the United States, combining an air for rigid professionalism with a visible fondness for the United States and hope for it to continue improving, encouraging American youth in particular with spurring on change.

However, in terms of portrayals of Obama and his public image, the biggest outlet for both has inarguably been the internet. With his two terms encompassing the Internet's evolution from a worthwhile utility to a mainstream commodity, Obama's legacy is, by and large, an online one. His presidency is largely remembered through its constant status as a source for Memetic Mutation, aided by his inherently amusing-sounding name, his Black and Nerdy hobbies and interests (which became known around the time when geek culture went mainstream), his online-friendliness, and his skilled invocations of The Comically Serious. Memes about Obama (most of them generally benign) still pop up here and there to this day, and he's regarded as the most meme-friendly president in US history.

In terms of his actual presidency, public opinion on Obama today is generally mixed, but mostly skews positive with little outright hatred outside of the far right and far left. Criticism of Obama generally focuses on his inaction on immigration reformnote His administration saw a record number of deportations at the time, though he did eventually try to use executive orders to circumvent Congress and protect immigrant children., his management of the financial recovery and his handling of the War on Terror, in which he failed to truly resolve it and took actions that some argue exacerbated it (namely the aforementioned drone strikes). Likewise, critics of a more progressive bent have expressed disappointment with Obama for not going further with the systemic reforms that he campaigned on (e.g. not pushing for a public option in his healthcare act, not spending more on the recovery and not prosecuting Wall Street figures who triggered the recession), as well as his continued support for foreign entanglements and wars abroad. Additionally, retrospective analysts note that while Obama's economic recovery program benefited urban, non-redlined Americans to a strong enough degree to restore their confidence, rural residents and even some middle-class suburban families didn't see the same benefits, and in some cases the the recession belatedly hit them during the urban recovery.

In hindsight, the tepid financial recovery, racial backlash and general disillusionment with establishment Democrats like nominee Hillary Rodham Clinton resulted in Democrats losing most of their government seats and Donald Trump becoming elected in 2016. Subsequently, the Democratic Party began shifting leftwards with progressive populists like Bernie Sanders capturing the liberal zeitgeist and moderate Democrats adopting more liberal policies. Most notably, Obama's Vice President, Joe Biden, won the 2020 election by campaigning on a platform significantly to the left of Obama's.

That said, most agree that he came at a time when an upbeat president like himself was most needed, with his optimistic campaign messages and fatherly demeanor being considered highly beneficial in maintaining American morale in the face of the Great Recession. His push for domestic social and economic reform also garnered favor among the American left (even if his Affordable Care Act was mostly just repurposing a failed bill by Richard Nixon), and his combination of an articulately dignified demeanor and lighthearted sense of dry humor led many to regard him as an excellent public relations figure as well. Furthermore, despite the mixed response to his handling of the conflict in the Middle East, the killing of Al-Qaeda founder Osama bin Laden in 2011 under his command was generally regarded as a great moment of catharsis for America, nearly ten years after the September 11 attacks that had so thoroughly shaken the world at the start of Bush's term. On the international front, his pivot to Asia and perceived reluctance to be more forceful was divisive in Europe. However, he remains fairly popular with young Europeans, and is more fondly remembered now, if only because he is the polar opposite to both George W. Bush and Donald Trump and - in retrospect - is wistfully remembered as a statesmanlike and rational figure. Contrast the reactions to their visits in Britain: Obama was welcomed like a rockstar. Trump was greeted by a colossal 'Trump Baby' balloon flying over London.

Long after the conclusion of his presidency, Obama still remains a vocal figure in US politics through Twitter, acting as an impromptu pundit on the state of the country and the greater world and continuing the idealistic, paternal brand of political rhetoric that had so thoroughly defined his time as president.

Along with Jimmy Carter, Bill Clinton, George W. Bush, and Donald Trump, Obama is one of the only five still-living former US presidents. Obama was also the first president to receive a 3D-rendered portrait of himself

◊, created by the Smithsonian Institution in 2014.

Tropes associated with Barack Obama in media and portrayals in fiction: