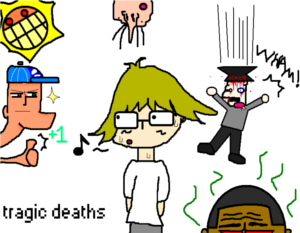 Mr. Bignose! I will kill you using the comic's TV Tropes page!

Tragic Deaths is a comic about a war between the author of the strip, Petalklunk, and the trigger-happy fellow with a large nose, appropriately named Mr. Bignose. There’s also the poorly drawn Mr. Birdbeak, and Ranch Obama, who can kill you in three ways just by looking at you.

This Comic Provides Examples of: