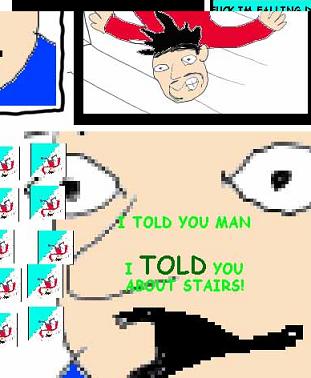 Most of the comic is like this.
"Pfft you don't merely read 'Sweet Bro and Hella Jeff' you have to appreciate it like a fine wine."
— Mustang, Penny Arcade forumite
Advertisement:

is a webcomic which is pretty much the epitome of the Stylistic Suck trope in its medium. Originally spawned by Andrew Hussie from an exchange on the Penny Arcade forums in March 2009, it was some time thereafter integrated into Homestuck as a Show Within a Show, ostensibly written by Dave Strider. It stars the eponymous Sweet Bro and Hella Jeff, as well as their Token Black Friend Geromy, as they get up to... well, plenty of things, none of which quite make sense.

You can also buy a hardcover SBaHJ book, co-designed by Hussie, KC Green, and John Keogh, collecting the first 44 comics. Although more comics have since been uploaded to the site, the book contains several exclusive features such as author notes from Dave, an "ACTIGITY ZONE", and physical objects such as a "paperclop" and a "pocket edition" poster. Notably, when it was first released, there was a limited time offer to pay 50 dollars to get it signed by Dave himself (compared to the mere 5 dollar price for Andrew's signature).

A second book, co-authored by Hussie, KC Green and infamous Twitter shitposter dril, has been announced via Kickstarter. While not even remotely as successful as the Hiveswap version, it has also been funded. It seems to be completely original, involving the titular characters in the "Quest for the Missing Spoon".

Man on the Internet of Undertale the Musical fame in a fitting style.

clock for bettAR page (if your a bich)

I WARNED YOU ABOUT TROPES BRO!!!!! I TOLD YOU DOG!

dufe, are you SCOPING this arpicles CHOICE ASS..