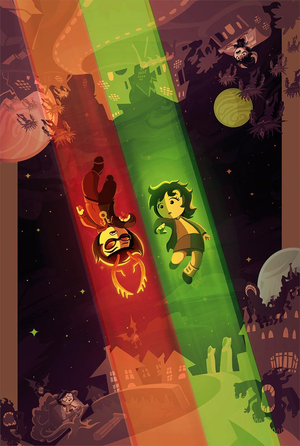 Hiveswap is a Video Game developed by What Pumpkin and written by Andrew Hussie and Cohen Edenfield. Set in the Homestuck universe, the game is about a fourteen-year-old girl named Joey Claire and her brother, Jude Harley, as well as several Alternian kids.

Joey is playing with her dog, Tesseract, in the yard one day, when her house is suddenly attacked by terrible monsters. Joey escapes inside, climbing up to the attic, and her brother hides in their tree house. In the attic, Joey finds a strange machine that switches her with an alien kid named Dammek. Joey finds herself on Dammek's home planet, Alternia, a dangerous, dystopian Empire that is teetering on the brink of civil war.

More information about the game can be found here

was released on April 13, 2017, with a tentative release date, after the game didn't release in January as said in the first trailer.

Hiveswap: ACT 1 was released on September 14th, 2017. ACT 2 was supposed to have a Spring 2018 release. During the prerelease period, new trolls were unveiled via a "Troll Call", which can be viewed here

. The developers have also confirmed that a sister game, called Hauntswitch, will be released after Hiveswap's done, and is set to show the story from Dammek's point of view as he is sent to Earth. Hiveswap Friendship Simulator, a Visual Novel-type game focusing on the characters introduced in the Troll Call, was announced for release on April 13, 2018. It ended in December 2018. ACT 2 was finally released on November 25th, 2020. ACT 3 was announced in July 2022, with no definite release date given.