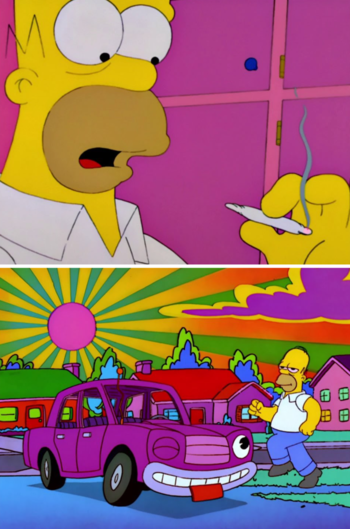 And it's medicinal marijuana, no less!
Will: Can somebody call me an ambulance? Because I'm in trouble. Time is moving really, really slowly, and everything is flat. I need you to call me an ambulance, or failing that, my mummy. I really want my mummy because, and I'm not being dramatic, but I think I might be dead. Is that clear? Mummy or ambulance.
(two scenes later)
Paramedic: (incredulously) Are you sure it was just cannabis you took?
— The Inbetweeners
Advertisement:

Marijuana is one of the less potent psychoactive drugs. It causes euphoria, thirst, hunger, and occasionally lethargy or paranoia, and it can also cause your thought processes to become one long string of Fridge Logic and/or Fridge Brilliant moments (which may or may not be remembered once the effects wear off). It also takes a little while to get used to it—often, people doing it their first time don't feel any effects at all. Even very high doses won't cause hallucinations in 99% of the population.

You wouldn't know that from the movies, though.

Dean Bitterman or the Doting Parent is tricked or cajoled into smoking up, or more likely eating a pot brownie. Five minutes later, they're riding a unicorn through a rainbow in slow-motion, or arguing with the plants, or being chased by musical notes in time to the background music. Expect to hear Steppenwolf's "Magic Carpet Ride" or "White Rabbit" by Jefferson Airplane. It's almost as if they've taken a powerful hallucinogen. Yes, in their universe, marijuana is LSD.

It is worth mentioning that large doses of marijuana can produce hallucinations in some people. The array of effects experienced from any dose vary considerably from person to person, and from one strain of the plant to another. Research into the former effect may be partly responsible for the myth, along with journalists that ignored how large a dose the "psychonauts" used and what counts as a hallucination to experimental psychologists. Also, even those who regularly smoke cannabis may experience unexpectedly strong effects when vaporizing it, which is a more efficient method of administration. When eating it, it can take a long time to kick in, so a common mistake is to eat too much because it seems to have little effect - only to find oneself extremely inebriated for half a day when the full effects come on. Such an overdose can cause visual and auditory hallucinations, but those are not enjoyable at all and are often combined with panic attacks, nausea and so forth. Hallucinations remain unlikely, but judgement and driving will be impaired. A person who has consumed enough marijuana to experience hallucinations is unlikely to be able to walk on two feet, let alone drive, so anyone who would have consumed it unwittingly would have called an ambulance at this point and would not go on a wacky drug-fueled adventure.

It's a matter of debate whether second-hand marijuana smoke has any real effects (sometimes referred to as a "contact high"), beyond giving some people a splitting headache and nausea from the smell. Contact highs do occasionally turn up in fiction, usually in the context of someone being exposed to pot for a long period of time in an enclosed space like a vehicle.

May be a case of research failure, especially in older works. Seldom played straight in recent decades, but there are exceptions. Often overlaps with Scare 'Em Straight. Subtrope of G-Rated Drug.

Another cause of this trope may be that the medium lacks the ability to portray intoxication from a first-person perspective accurately while also not making the intoxication seem much less powerful than it is. There are many drugs that have subtle and/or mild visual or auditory effects, if any at all, making it very difficult to portray the severity of a high dose accurately. It can sometimes help to think of the effects as metaphors.

This page also covers the use of exaggerated or inaccurate effects in other drugs. Examples which involve alcohol may also fall under Pink Elephants.

Alternative Title(s): All Drugs Are Acid