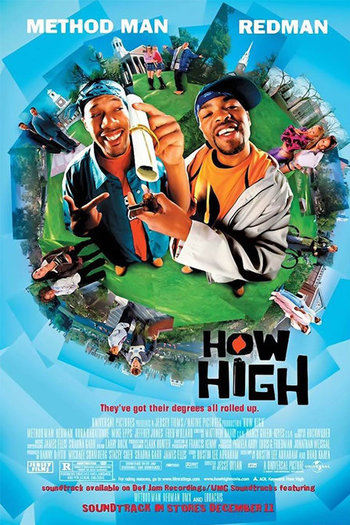 No, not what the Yes-Man asks if his boss orders "Jump!"

How High is a 2001 stoner comedy directed by Jesse Dylan, starring Method Man and Redman.

Silas P. Silas (Method Man) and Jamal King (Redman) are two stoners living in the inner city. Silas is a weed grower, with aspirations of getting his own high tech growing lab. Jamal is just a lazy bum, living with his mom. After Silas's friend Ivory sets his new dreads on fire and falls out a window to his death, Silas decides to use his ashes in a special new weed, and take the THC's to get into college. Meeting Jamal there, they smoke it up, and discover they can see Ivory's ghost, and he can give them all the right answers. With perfect scores, the new friends are accepted into Harvard, much to the uptight Dean's dismay.