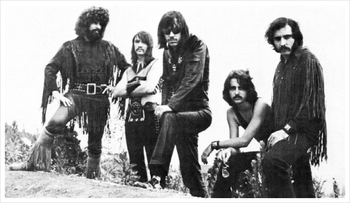 L-R: Goldy McJohn, Jerry Edmonton, John Kay, Larry Byrom and George Biondo.
"Like a true nature's child
We were born, born to be wild
We can climb so high
I never wanna die..."
Advertisement:

Steppenwolf are a Canadian-American rock band from Toronto and Los Angeles that formed in 1967. They are best known for their hits "Born to Be Wild" and "Magic Carpet Ride".