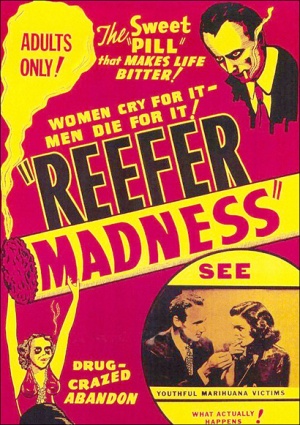 Originally called Tell Your Children, this anti-marihuana film from 1936, was directed by Louis Gasnier and originally financed by a concerned church group and intended for parents, but was picked up by producer Dwain Esper who recut it as an Exploitation Film. Today, it's in the public domain and considered So Bad, It's Good, and has even inspired a 1998 musical satire which itself was adapted into a well-received TV special.
Advertisement:

Witness the frightful toll of the new drug menace which is sweeping America online.