Man in a Bikini 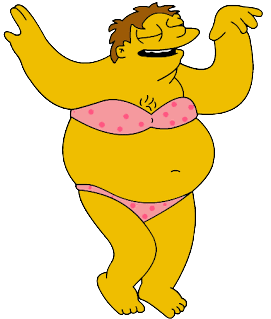 Bringing sexy back, oh yeah!
"I love a man in a speedo."
— Anastasia Ashley
Advertisement:

Bikinis are usually shown on television as Fanservice when worn by women. However, men shown wearing them are likely to be done for Fan Disservice or Played for Laughs.

Very occasionally they will be shown as Wholesome Crossdresser - type characters.

However, this is also Truth in Television: fem/gender-nonconforming men, such as drag queens and crossdressers, do enjoy wearing feminine style bikinis in spite of arbitrary gender constructs. Also note that the word "bikini" can also refer to skimpy swimming shorts, which are technically unisex clothing - but men wearing briefs as a swimsuit generally looks more than a little odd to North American audiences. See Briefs Boasting for men who proudly wear legless briefs to show off their bodies.

Alternative Title(s): A Man Should Never Wear A Bikini