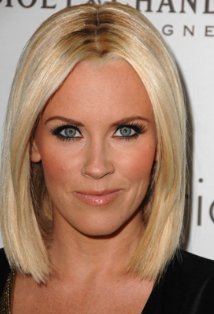 "Every time a famous type decides not to vaccinate their baby, the horns on Jenny McCarthy's head grow half an inch more and her evil powers get stronger."
—Michael K.

Jennifer McCarthy Wahlberg (born Jennifer Ann McCarthy; November 1, 1972) is an American actress and model from Chicago. She first became famous as Playboy magazine's 40th anniversary Playmate. Her credits include John Tucker Must Die, Dirty Love, Singled Out on MTV and her own sitcom on NBC. She was in a relationship with Jim Carrey from 2006 to 2010. She is the cousin of Melissa McCarthy.

She has become well-known for her outspoken support for the anti-vaccine movement, which proposes the belief that certain common childhood vaccines cause autism, and that this cause is being covered up by the pharmaceutical industry/government. It should be noted, of course, that this theory is based on a preservative containing small amounts of mercury in some vaccines that was removed over a decade ago, and which has no scientific underpinning whatsoever. This has earned her a great deal of criticism, including a website

tracking her "body count" (their words).