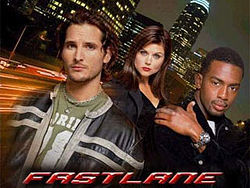 Fastlane was Buddy Cop Show that ran on FOX from September 2002 to May 2003. It was centered around the Candy Store, a base of operations for deep-undercover cops with access to the most impressive cars, weapons, and other confiscated toys. Their motto: Everything we seize, we keep; everything we keep, we use. Their goal: infiltrate various big-name crime organizations and take down their leaders. Pretty much like Miami Vice, but in the City of Angels.

The show is notable for its licensed soundtrack, laundry list of guest stars, unconventional cinematography, and impressive pyrotechnics. Unfortunately, all of that contributed to the show's ludicrously high production costs, averaging at about $2.6 million per episode. That coupled with the dip in ratings from the move to the Friday Night Death Slot ensured its swift cancellation.