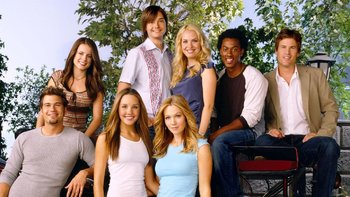 What I Like About You is a 2002-2006 sitcom from The WB about two sisters living in New York. Holly Tyler (Amanda Bynes) is an impulsive, hyperactive teenager; Val Tyler (Jennie Garth) is hyperorganized neat freak nearing 30.

In addition to coping with each other, they also have to deal with their friends (in order of appearance):

(Characters with no last name given are exactly that.)

Created by Dan Schneidernote it, along with Guys Like Us (produced for UPN) are the only shows Schneider created/produced shown first-run outside of Nickelodeon and Wil Calhoun. Correspondingly, it mixed Slap Stick with relationship comedy.