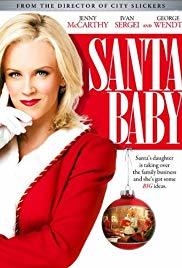 Santa Baby is a 2006 made-for-TV movie, named after a famous Christmas Song. It was made by the ABC Family channel and is best known as a vehicle for actress Jenny McCarthy.

In it, we meet Santa Claus' daughter, Mary (McCarthy) who had moved away from their North Pole home to become a powerful business executive in New York. But when her father suffers a heart attack, she is forced to return to help get everything ready for Christmas Eve. However there is friction with her father when she decides to modernize the system. Additionally, she reencounters an old flame, Luke, the North Pole Mailman. The problem with this is that she already has a boyfriend back in NY.

The film had a sequel in 2009: Santa Baby 2: Christmas Maybe. It takes place a year after the first. Santa decides to permanently retire and leave Mary in charge without even asking her, which again brings conflict with her life as a businesswoman. In addition, the new Mailman, a woman named Teri, is jealous of Mary and begins secretly sabotaging her efforts.