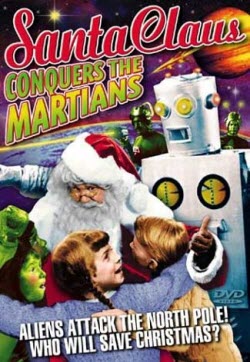 Santa Claus Conquers the Martians (also titled Santa Claus Defeats the Aliens) is a 1964 science fiction/fantasy film in which Martians, trying to cure the malaise of their children, kidnap THE Santa Claus (and a couple of earth kids that got mixed up in the plot) and take him to Mars to create the first Martian Christmas. Santa takes the whole thing surprisingly well and is only too happy to help. However, a small band of Martians rebel against the idea of Christmas or children being happy and try to kill Santa Claus. By the end of the movie, the Martians discover that they can just get a really annoying Martian named Dropo to stuff a pillow down his shirt and DRESS as Santa, thus allowing Santa and the earth kids to go home.

A No Budget kids film with cheap sets, awful costumes, cheesy acting, and a laughably bad script, the film regularly appears on lists of the worst films ever made. It is regularly featured in the "bottom 100" list on the Internet Movie Database, and was also featured in an episode of Elvira's Movie Macabre, the 1986 syndicated series Canned Film Festival and numerous other venues for bad movies over the years. It was directed by Nicholas Webster, and it stars John Call as Santa Claus. It also includes an 8-year-old Pia Zadora playing the role of one of the Martian children, and is the first appearance of Mrs. Claus in an audio-visual medium.

For the Mystery Science Theater 3000 version, please go to the episode recap page. Both Cinematic Titanic and Rifftrax riffed the film as well. It also had a comic book adaptation that was mocked on Atop The Fourth Wall