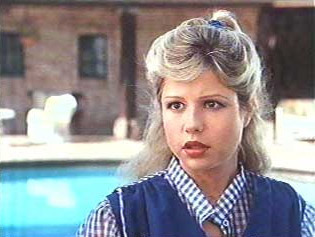 The undisputed master of Dull Surprise.
"You know, it's not the people in Hollywood who go to see movies that will make a movie successful; it's the people all around the country; it's word-of-mouth."
Advertisement:

Pia Zadora (born May 4, 1953 in Hoboken, New Jersey) is an American actress and singer who came to national attention in 1981, when following her starring role in the highly criticized Butterfly, she won a Golden Globe Award as New Star of the Year, while simultaneously winning the Golden Raspberry Award for Worst Actress, and "Worst New Star" for the very same performance. Not surprisingly, afterwards it was revealed that her husband essentially provided a vacation for the Golden Globe voters.

Zadora's acting career falls mainly into The '80s, though her career goes back to The '60s when she appeared in Santa Claus Conquers the Martians at the age of eight. Her fifteen minutes of fame ended after The Lonely Lady and she has been fully retired since The '90s. Her last acting appearances were doing a musical performance in The Naked Gun 33⅓: The Final Insult and an episode of Frasier five years later.

She in total has no less than four Razzies to her name, including worst new star of the decade and a nomination for worst actress of the century, losing the latter "honor" to Madonna. A apocryphal story claims that while giving an especially unfavorable performance of The Diary of Anne Frank, an audience member shouted "SHE'S IN THE ATTIC!" when the Nazis came on-stage.

She was also a singer and found much more recognition and success in that field. She is now retired from that career as well.