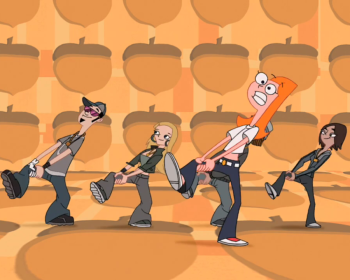 Squirrels in My Pants!
The Do the Flop Guy liked to dance all the time
But he couldn't do it right no matter how hard he tried
He had two left feet from an accident at birth
And every time he danced he always flopped face first
But then one day as he jumped in the air
Everybody turned and looked and they pointed and they stared
He had a bright idea right before he hit the floor
He shouted "Everybody do the flop!": a new dance craze was born!
— “Everybody Do The Flop”, asdfmovie
Advertisement:

Let's say a character is just walking along, and suddenly they get a horrible itch in the middle of their back. There just happens to be some music playing, and as they contort their body to try to reach the itch (coincidentally in time with the music), people around them start to do the same thing, thinking it's a dance. It becomes a Dance Sensation, and usually the character doesn't even notice, as they're still trying to get to the itch.

It often gains momentum when one person in the crowd yells, "Hey, look at those cool dance moves!" or something similar. That person starts doing the move, and pretty soon everybody's doing it.

Overlaps with Squirrels in My Pants, as this is sometimes the reason for the motions. It also tends to be attributed to Agony of the Feet, more specifically a Hurt Foot Hop. If someone pretends to be dancing, that's an Exercise Excuse, and it could lead to an Accidental Dance Craze.

Example of:
Squirrels in My Pants