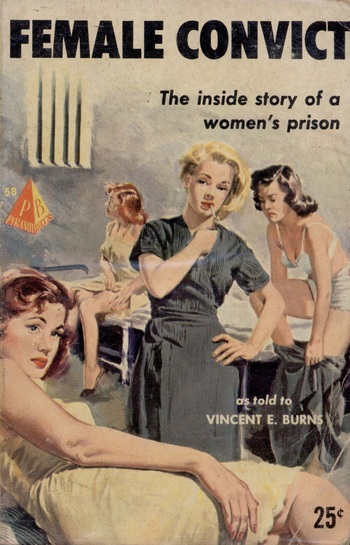 Marshall: Spending ten months undercover in a women's prison? I can think of worse.
Mary: You do know it's not all lingerie and pillow fights?
Marshall: But it is sometimes, right?
— In Plain Sight
Advertisement:

In short, women's prisons are hotbeds of... uh... intrigue. For instance, if there's a female detective character, she pretty much has to be sent to prison undercover, as is the law in most countries.

Still, an unfortunate effect of Most Writers Are Male is that most of them have never been to a women's prison, nor do they know how life is really like inside of it. It can be because male inmates aren't allowed in. It may be because female offenders aren't considered as violent, dangerous or despicable as male offenders and thus less worthy of scrutiny - never mind that being in a prison means they are ostensibly guilty of one or more crimes in the first place. It almost certainly involves a (possibly subconscious) downplaying of violence between females inmates, as acknowledging that would mean treating the loss of female life in the same way as loss of male life. It may even be because there are a lot more male prisoners than female. Or it may be because they just didn't bother with research.

But, let's face it, it's because many writers assume women's prisons are a lesbian porn heaven. No matter what, in sharp contrast to men's prisons, women's prisons are always believed to be a fetish station where women learn to be bisexuals thanks to this oh-so beautiful and chaste thing called lesbianism (which doesn't involve rape at all, oh no), so they can serve lesbian fantasies better. And of course, female guardians partake joyfully in it as well as the lucky male staff who live in this palace of pleasure! It also goes without saying that the women are beautifully feminine except perhaps for a few tough dominant ones who run the prison and initiate newcomers into the homosexual prison environment. Depending on how dirty-minded the audience is, and the time slot, this may result in a sort of Chekhov's Gun scenario as the audience expects... action. In a movie or late-night cable TV show, there will be at least one Shower Scene or strip-search.

Needless to say, the above description is purely fantasy and NOT Truth in Television, except maybe for the shower scenes and the nude searches, which also happen in men's prisons. In Real Life, women's prisons are populated with the same ilk as the men's: criminals who run the full gamut of appearance and potential for violence. Just because they're women doesn't mean they are more peaceful and gentle. The daily fight for dominance also applies there, catfights tend to involve the use of shivs, and the Alpha Bitches are just as ruthless and physically violent as Alpha Dogs in men's prisons, especially to newcomers who happen to be prettier than them. In an all-female setting, beauty a hindrance, not an asset. Also, just like in men's prisons, sexual violence—at the hands of corrections staff as well as fellow prisoners—is a very real and constant threat. And if the rapist is a man, there's the additional risk of an inmate becoming pregnant in the worst possible environment for such.

A case of Situational Sexuality to pander to the audience. Might be used as an Excuse Plot for a Sweeps Week Lesbian Kiss. May contain offensive tropes like Double Standard: Rape, Female on Female. The presence of The Queenpin among the inmates is often telltale of a rare Darker and Edgier take on the trope as this kind of character is usually not that fond of other women.

Compare Prison Rape and Wondrous Ladies Room (another trope whose fallaciously ideal depiction of women is due to Most Writers Are Male).