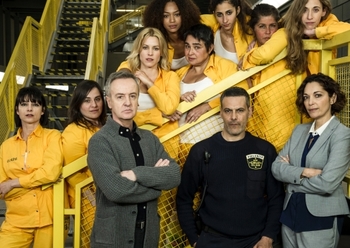 Also known as Vis a Vis in its native country. This show is a Spanish drama/thriller set in a women's prison. It is produced by Globomedia and originally aired on Antena 3 between April 2015 and June 2016, when the channel decided to bring the series to an end after a ratings decline in its second season. As of July 2017, the series has been Un-Canceled, as FOX Spain is set to produce a third season after reaching a deal with Antena 3's parent group Atresmedia. In the UK, Walter Presents (a branch of Channel 4) has picked up both seasons for online viewing. Their airing is in Spanish with English subtitles and was renamed Locked Up.

The story follows a naive young woman named Macarena Ferreiro (Maggie Civantos). She has been imprisoned for fraud and embezzlement, pending trial. Potentially, she will spend up to seven years incarcerated, for crimes she claims to be innocent of. During the course of the show, Macarena attempts to prove her innocence. Failing that, she wants to acquire the money to pay her bail: one million euros. She adapts to the harsh realities of prison very poorly, and immediately puts herself in danger when she is witness to the murder of another inmate.

The situation is not helped when Macarena discovers the location to millions of stolen euros. This leads to a race against time as Macarena's family hunt for the money to pay her bail, before prison inmate Zulema Zahir or her boyfriend 'The Egyptian' disover its whereabouts. The Ferreiros become embroiled in an increasingly dangerous situation, as The Egyptian threatens them outside the prison, and Zulema threatens Macarena within it.