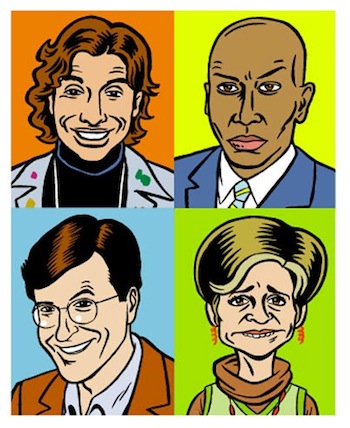 "I'm moist like a snack cake down there!"
Advertisement:

Strangers With Candy was a darkly comic sitcom that ran from 1999 to 2000 on Comedy Central and created by comedians Amy Sedaris, Paul Dinello and Stephen Colbert.

Jerri Blank, a "46-year-old boozer, user, and loser", ran away from home when she was young and spent thirty-two years doing things we'd really, really rather not hear about, no matter how eager she is to tell us about that donkey show in Tijuana. After spending time in the slammer for stealing a TV, Jerri decides to abandon her life of debauchery and go back to exactly where she left off- as a freshman at Flatpoint High.

Of course, seeing as Strangers With Candy is based entirely on Spoof Aesops, Jerri's intentions of leaving her twisted, drug-addled past behind her never come to fruition. In her own words: "Oh, I'm still doin' the wrong things, but at least I'm doing them the right way." This mockery of after-school specials focuses less on the students and more on the adults concerned with nothing but their own selfish needs.

Jerri was based on Florrie Fisher

, and many of Jerri's stories about her past are taken directly from Fisher's film The Trip Back, the inspiration for Strangers With Candy. Some comparisons here

Sample plot: In the first episode, Jerri attempts to befriend a popular girl by supplying her with homemade drugs. The popular girl winds up in a coma, and Jerri spends much of the episode somewhat in guilt. When the girl dies, it seems as though Jerri will finally own up to what she has done — but Jerri throws a memorial party instead, gaining the popularity she's wanted all along.

Oh, and every episode ends with some kind of a dance sequence.

The show starred creators Stephen Colbert (Chuck Noblet), Paul Dinello (Geoffrey Jellineck), and Amy Sedaris (Jerri Blank). (Fourth co-creator Mitch Rouse appeared on the show only once.) It lasted for three seasons on Comedy Central, from 1999 to 2000, and was briefly revived for a movie in 2006.