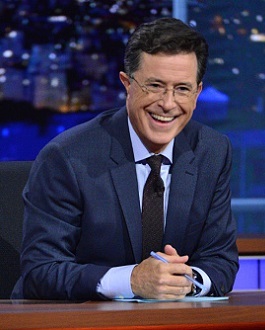 Stephen Colbert did not believe in books. They're all fact and no heart. (You may think he wrote one

, but it's just a transcription of what he hollered into a tape recorder. Over a three day weekend, no less.) A staunch supporter of George W. Bush and devoted admirer of Bill O'Reilly, Colbert lambasted the liberal elite four nights a week on The Colbert Report from 2005 to 2014. He is now immortal.

Okay, Stephen Tyrone Colbert (born May 13, 1964) is actually an improvisational comedian and political satirist. Best known for lampooning bull-headed conservatives as host of the The Colbert Report after being a popular correspondent for The Daily Show from 1997 to 2005 (the show's longest-serving correspondent until Samantha Bee broke his record in 2012), the massive success of that series led to his taking over the reins of The Late Show in September 2015 following the retirement of David Letterman.

Between Colbert's Daily Show run and years on the Report, he and Jon Stewart spent fifteen straight years as the greatest late-night comedy duo in the nation (and many would say the world). Between airing sister shows back-to-back for nine straight years, Stephen's six-year run as the acknowledged best correspondent on The Daily Show, co-hosting the Rally to Restore Sanity and/or Fear in 2010, their epic SuperPAC shenanigans in 2011/2012, and co-anchoring eight consecutive "Indecision" election specials, you really can't separate these two.note You really can't. The Report was, during its final episode, revealed to have been just one long Daily Show segment.

While there are many similarities between Stephen Colbert the man and "Stephen Colbert" the character, there is a stark difference in that the character was, in Colbert's own words, "a well-intentioned, poorly informed, high-status idiot."

Oh, and Colbert is also known for that time he was invited to be the featured entertainer at the 2006 White House Correspondents' Association Dinner

and, instead of providing typical light-hearted fare, comedically savaged President George W. Bush and the press to their faces, all in his show persona. ("I stand by this man. I stand by this man because he stands for things. Not only for things, he stands on things. Things like aircraft carriers and rubble and recently flooded city squares. And that sends a strong message, that no matter what happens to America, she will always rebound — with the most powerfully staged photo ops in the world.")

His performance was an internet sensation, and the audio recording became the #1 album on iTunes, remaining a top download for months. New York Times columnist Frank Rich called Colbert's performance a defining moment leading up to the 2006 midterm elections, when the Democrats became the majority party in Congress. Colbert himself has said he did not necessarily mean to make a huge political statement, but only intended to be funny (although obviously for a different audience than the dinner coordinators would have liked), and did not realize how strongly his performance resonated until speaking with awed coworkers the next day. Despite all this, Colbert's performance initially got very little media attention, with many major news outlets like The New York Times not even mentioning him in their day-after report on the Dinner. The mainstream media was widely criticized for this, seeing as the media itself was a major target for Colbert's mockery and thus the muted coverage was seen as self-serving.

On Sept. 24, 2010, having been invited to appear by committee chairwoman Rep. Zoe Lofgren, Colbert testified before Congress, IN CHARACTER, at the House Judiciary Subcommittee Hearing on Immigration and Farm Labor.

He did drop character at one point, when asked by Rep. Judy Chu why he felt this issue was important.

Colbert eventually grew tired of maintaining his fictional persona and was considering ending the Report when a call came in about a new job opportunity. In 2014, CBS announced that Colbert would succeed David Letterman as host of The Late Show in 2015. Colbert confirmed that The Late Show (unlike his Congressional testimony) would not be performed in-character but promised to continue to make political commentary from behind his new desk. The Late Show with Stephen Colbert premiered on September 8, 2015.note Where Colbert goeth, Stewart is sure to follow; Jon Stewart is an executive producer on The Late Show. And ne'er the twain shall part. He was true to his word and continued to skewer conservative politicians, this time more directly. Colbert happened to take the job right around the time Donald Trump began his presidential campaign, and he became one of the former White House resident's biggest critics on national television. Despite early worries that this would shrink the show's audience, Colbert's approach successfully tapped into the increasing charged political atmosphere of the Trump era; The Late Show supplanted The Tonight Show as the #1 show in late night in 2017 and hasn't left the top spot since.

Colbert came up in comedy through improv at The Second City in Chicago (he even guest-starred on two episodes of the US version of the improv show Whose Line Is It Anyway?) while slowly but surely leaving behind his ambitions to be a serious actor. (Thank God.) There he met lifelong friends Paul Dinello and Amy Sedaris, with whom he co-created and co-starred in Strangers with Candy. He also did considerable voice acting in Harvey Birdman, Attorney at Law, and was the voice of Ace in Saturday Night Live's The Ambiguously Gay Duo (fellow future Daily Show star Steve Carell was the voice of Gary). Even less known is his work on the short-lived The Dana Carvey Show and the even more obscure sketch show Exit 57. There's also his performance as President Hathaway in Monsters vs. Aliens; he worked with DreamWorks again for Mr. Peabody & Sherman. His Middle-earth expertise also earned him a cameo in The Hobbit: The Desolation of Smaug, followed by an exclusive on his interview with Smaug himself.

Officially One of Us and unashamedly so. An avowed fan of the works of J. R. R. Tolkien, he can recite long passages from The Lord of the Rings from memory. He has an encyclopedic knowledge of LOTR facts and trivia, such that it’s become something of a meme that any anonymous or pseudonymous expoundment of LOTR nerdery on the Internet is actually Colbert. When Viggo Mortensen was a guest on The Daily Show, Jon Stewart played a recording of Colbert reciting the many names of Aragorn. (In addition, Mortensen had had a set of chocolates shaped like Lord of the Rings characters sent to Colbert's office, and Stewart's receiving this news was essentially speculating on how powerful a Nerdgasm Colbert would have). When CNN misused an image of the Balrog on 6/6/06, he proceeded to rattle off a list of references to The Silmarillion without even using notes. Colbert also keeps a set of polyhedral dice in his desk at The Colbert Report and is the current keeper of Captain America's mighty shield (delivered after Steve Rogers' short-lived death) and Andúril (gifted to him by Aragorn himself). Not content to only possess Andúril, he was also able to draw Hadhafang (the sword of Arwen Undómiel) from its scabbard on a 13 July 2018 episode

of The Late Show with Stephen Colbert when Liv Tyler visited the show complete with her actual WETA-forged prop. Get behind this man on the battlefield. He also won the popular vote in the 2008 election (in the Marvel universe). After being knighted by the Queen of Jordan with Andúril his full name has been expanded to Sir Dr. Stephen T. Colbert D.F.A. He has given "a shout out to all [his] bronies." (Before he admitted he had no idea what it meant, looked it up, and promptly took it back.) Finally, he declared that he was the new First Lady of France after French President Hollande's sex scandal resulted in the seats being rearranged at a White House function so that Colbert was in the former First Lady's chair.

Oh, and he's also a practicing Roman Catholic who teaches Sunday school on the weekends. He can call up Bible verses in Latin at the drop of a hat, recite the Nicene Creed, the Ten Commandments, and a truly staggering amount of Catholic trivia from memorynote seen on the Report and again on the Late Show, and calmed down the notoriously interview-shy Jack White by engaging him in a Catholic trivia contest. On The Late Show, Pope Francis' 2015 visit to the USA occasioned a positive barrage of Catholic jokes, as well as more serious discussions with an all-Catholic panel on issues of faith vs. social progressivism and the meaning of being an American Catholic in the present day.

He is also known for coining the words 'truthiness' and 'wikiality', as well as the Colbert Bump.

Things that have been named after Stephen include: