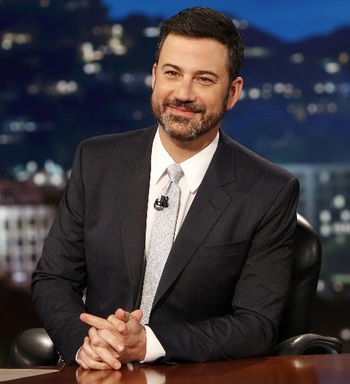 "If you want to do a talk show on network television, you're probably going to wind up having a desk and a band, wearing a suit, and having a sidekick. Audiences want to feel comfortable."
Advertisement:

He is the host and executive producer of Jimmy Kimmel Live!, a late-night talk show that premiered on ABC in 2003. Kimmel also hosted the Primetime Emmy Awards in 2012 and 2016 and the Academy Awards Ceremony in 2017 and 2018.

Before hosting Jimmy Kimmel Live!, he was best known as the co-host of Comedy Central's The Man Show and Win Ben Stein's Money. Kimmel has also produced such shows as Crank Yankers and The Andy Milonakis Show. After being asked by Comedy Central, Kimmel agreed to do a fifth season of Crank Yankers after a 12-year hiatus.

Kimmel is considered a left-wing celebrity due to his fundraising efforts for the Democratic Party, vocal support for stricter gun control laws in response to mass shootings throughout the United States, and being one of Hollywood's highest-profile critics of Republican former President Donald Trump; he delighted in pointing out flaws in Trump's policies and speeches both on and off the show. Trump, in turn, attacked ABC, due in part to Kimmel's criticisms, as well as Kimmel himself — leading to Kimmel retaliating on his show by insulting Trump even more frequently. While usually he's dead serious about his contempt for Trump, other times he just wants to make fun of Trump to add in material for his show. In fact, Kimmel even invited A-list Trump supporters, or at least conservative celebrities, onto his show, and does not even bother arguing with them. Even Adam Carolla, one of Kimmel's closest friends who did Crank Yankers and The Man Show with him, is a Trump supporter.

From his ex-wife Gina, Kimmel has two kids (Katie and Kevin) who made on-screen appearances on The Man Show and off-screen appearances as puppets on Crank Yankers back in the early 2000s. He has two more children (William and Jane) with his second wife Molly, whom he wed in 2013. Between his two marriages, he had a high-profile relationship with comedian Sarah Silverman for five years.

"Apologies to Matt Damon, we ran out of time!"
Feedback