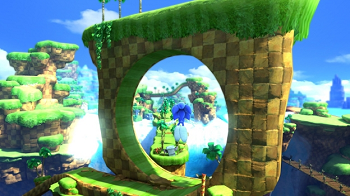 You wouldn't believe the natural processes responsible for that thing's shape.
Advertisement:

A type of landscape featuring natural formations that are the functional equivalents of theme park rides: Waterfalls, mountain torrents, glaciers or icebergs double as water slides, plot-sensitive erosion has created rock or snow formations that act as rollercoaster tracks or bobsled runs, complete with Ramp Jumps, giant water lilies serve as trampolines or at least provide a fun and bouncy way to cross a stretch of water, hanging vines can be used as ropeways, swings, for bungee-jumping or Tarzan-style transportation and so on...

Alternatively, the setting can be industrial or urban, as long as the environment invites misuse as a carnival ride. This can be both Benevolent Architecture or Malevolent Architecture, depending on your viewpoint and if you liked the "ride" or intended to take it in the first place.

Related to Skate Heaven Is a Place on Earth. Rollercoaster Mine, Ramprovisation and Lily-Pad Platform are subtropes. No relation of Theme Park Version.