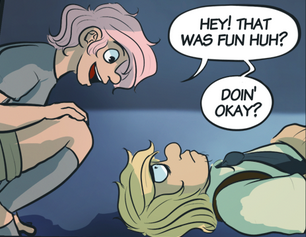 "Didn't we have some fun, though? Remember when the platform was sliding into the fire pit and I said 'goodbye' and you were like 'NO WAY!' and I then I was all 'we pretended we were going to murder you'? That was great..."
— GLaDOS, Portal
Advertisement:

The characters have just gone through a harrowing experience. They've Outrun the Fireball, survived the Death Course, ridden the Rollercoaster Mine and, amazingly enough, gone through it with their extremities intact, making them bona-fide Action Survivors.

While the other characters are catching their breath and trying to regain their bearings, one of them quips, "Well, wasn't that fun?", "Let's do it again!", or some other enthusiastic rejoinder. Depending on the speaker, this could be either a sincere statement or old-fashioned sarcasm.

A popular way to end a Chase Scene or an Indy Escape. The Deadpan Snarker, Lovable Rogue or Nightmare Fetishist is the odds-on favorite for delivering the line.

Opposite of I'm Not Doing That Again. See also Does That Sound Like Fun to You? for when a character thinks something would be cool, but an older or more experienced character is sure that they know better.

Later, after falling off a window ledge into snow...
Rizzo: I suppose you enjoyed that?!?!?
Gonzo: [matter-of-fact] 'Course!

That was fun! Let's read this page again! NO! Once was enough!

Dennis's reaction to the Die or Fly attempt.

Alternative Title(s): Lets Do It Again

Dennis's reaction to the Die or Fly attempt.