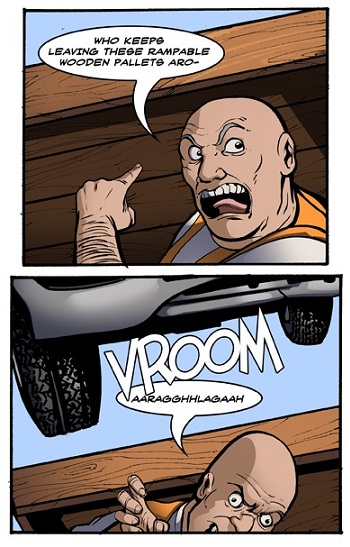 Man is only separated from heaven by that which he will not ramp.
Shepard: Hold on. We're about to find hostiles.
Garrus: What makes you say that?
Shepard: [points] Strategic cover.
— Awkward Zombie, regarding

It seems in certain shows and video games involving vehicles or characters with special abilities, the setting the characters inhabit was planned from the get-go with their mischief in mind, usually regardless of whether or not it would be useful to anyone else (say, for example, the people who live there). In the case of vehicles, for example, the town may have an abundance of broken bridges that can be jumped over, flimsy fences protecting places where cars aren't "supposed" to go, a strange overabundance of seemingly useless ramps, etc. Of course these could be considered Acceptable Breaks from Reality, but still, you have to wonder why someone doesn't complain about those bridges.

Now, if you want to get Meta, the world was designed with the main characters in mind, but Bellisario's Maxim means it's not that simple.

The polar opposite of Malevolent Architecture, yet you will often see both of them in the same place. Overlaps almost completely with This Looks Like a Job for Aquaman or Plot Tailored to the Party. Also see Theme Park Landscape (which can be both malevolent or benevolent).