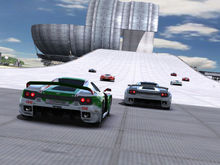 TrackMania is a series of racing games developed for the PC, Nintendo DS and the Nintendo Wii by French developers Nadeo.

The series is mostly based around arcade-style gameplay, with very short, "bite-sized" courses and very fast cars. The courses themselves are filled with jumps, loops and all sorts of stunt opportunities.

The main single-player campaign is a series of time attacks on many different tracks. Players can reset at any time if they crash (which you will do), either from checkpoints or from the start of the track. If you complete it, you're given medals based on your time (Bronze, Silver, Gold, and Author's time) and you can compare your times to players all across the world.

Online play places you in a single race where resetting makes you forfeit, makes you race a certain amount of laps in a circular track, or gives you a time limit in which to make as many runs as you want/can and aim for the best time. There are no collisions between cars; the track itself is your enemy.

But the real star of the show here is probably the Level Editor provided in game. The editor is strikingly similar to playing with LEGO bricks — the editor gives you a series of tiles with bits of road, and you can arrange them to your liking. The only real requirements are a start, a finish and a way to get from one to the other. As such, there are tons and tons of user-created tracks, most of them on the community Web site, TMX

The first two titles, TrackMania and TrackMania Sunrise, each with three environments to build in, were not particularly successful on the market. The game did not catch on among a wider audience until the free TrackMania Nations was released, a popular game that spawned a large community and many fansites. It had a single environment with many more freeform tiles, enabling a much larger variety of tracks compared to the older titles. To please fans of the original environments, Trackmania United was a paid version that also included the environments of the first games. A free "Forever" upgrade was available that enabled cross-server play between Nations and United players. The fifth title in the series, released in September 2011, is naturally called TrackMania 2 and features a new graphics engine and a single "Canyon" environment with far more track tiles and options than any of the older environments. The "Valley" environment has been released, as well as the fan favorite previous environment, "Stadium". All can be played without the others.

The title that released after is Trackmania Turbo, somewhat of a compilation of the Trackmania 2 game, considered as an arcade-styled spin-off. Turbo is a complete package of Trackmania 2's environments all rebranded and with different looking vehicle models, with a new environment added, named "Lagoon". Turbo fully transitioned into Ubisoft's Uplay platform (now Ubisoft Connect) and has an impressive aesthetic upgrade with lots of attractive style and HUD flair, as well as various changes to accommodate console play of the game and make it feel more accessible.

In 2017, Lagoon got added to Trackmania 2 as a playable title and an upgrade to the client, Mania Planet 4 was released, changing the UI and various other graphics element to continute upgrading from what Trackmania Turbo offered, while also adding numerous new blocks and features to previous environments.

In 2020, the seventh title in the series, simply named TrackMania, which serves as a remake of Nations, was released.