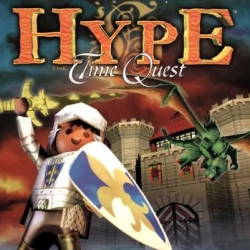 Hype: The Time Quest is a video game based on the line of German toys Playmobil. It takes place in a medievalesque setting, although some buttons and elevators can be found throughout the game.

Hype, the titular character, is turned to stone by a powerful black knight, and is then sent back 200 years in time, where he is released by an amateur wizard, and his future sidekick, Gogoud. So now he has to embark on a quest to collect magic jewels that allow him to travel through time so that he can kill the black knight, save the King, the kingdom and his betrothed.

The main characters are Hype and Gogoud, Hype being the character you play as (although there is his dragon, Zatila, whom hype rides on in order to perform a few tasks that require flight). Other major characters include Karon and Nohlin (the leaders of the brigands during the reigns, respectively, of Taskan II and Taskan III and allies of Hype's), Vibe (his bethrothed), and the black knight, Barnak.

The game was released in 1999 with another Playmobil game aimed for a younger audience: Lauras Happy Adventures.