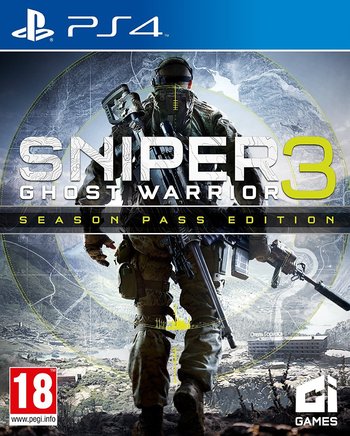 Sniper: Ghost Warrior 3 is an open world First-Person Shooter, and the third game in the Sniper: Ghost Warrior series by Polish developers CI Games (formerly City Interactive). It's notable for being the first game by CI Games with a AAA level budget. The game uses the CryEngine and seems heavily influenced by the Far Cry series in terms of design and gameplay. Like the previous games in the series, Sniper: Ghost Warrior 3 uses semi-realistic sniper mechanics such as having to compensate for bullet drop and wind deflection. New to the series is the ability to manually adjust the elevation of your scope based on distance-to-target to compensate for bullet drop.

The story takes place in the disputed Northwest region of Georgia, in which U.S. marine sniper Jon North is tasked with waging a one-man guerrilla campaign against the Russian-aligned separatists that have taken control of the region. However, Jon's primary reason for taking the assignment is to search for his older brother Robert, who was kidnapped by mysterious elite mercenaries 23 months prior to the events of the game and was recently sighted in the region. In the process, he stumbles upon a secretive international conspiracy and finds himself facing off against a mysterious, seemingly superhuman enemy sniper known as Armazi.